The Profit Wire will change everything you know about the news, markets and wealth in America. It’s the world’s first tool proven to exploit media bias, combing through millions of data points to find the real story on Wall Street for explosive monetary gains. 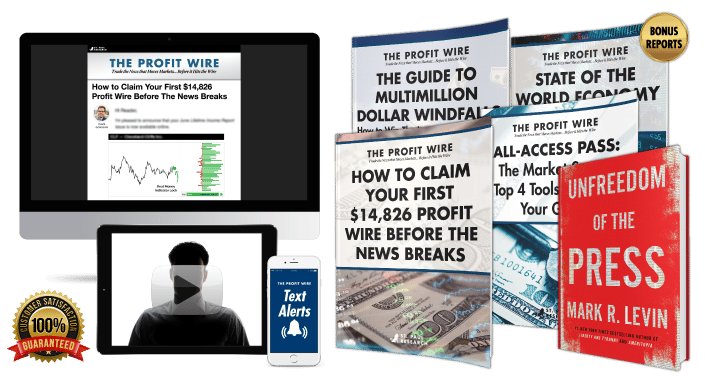 News controls the markets now more than ever before.

Editor Dave Gonigam knows this more than anyone, having spent over 30 years running news rooms for Fox, CBS, ABC, and NBC to name a few.

And now he’s entered into a $32 million venture with one of America’s most legendary traders.

The Profit Wire – How it Works?

This one-of-a-kind project uncovered a secret that can predict big news events… before they’re released to the public.

The beauty of this system is that it only takes one simple trade. Then once the big news is announced, you could walk away with a huge payday.

The Profit Wire will change everything you know about the news, markets and wealth in America.

Best of all, with Dave’s step-by-step instructions, you’re never tied to your computer or left guessing what to do.

It gives you the chance to walk away with an average of up to $14,826 per week and profit from the media’s biggest stories… before they’re announced to the public.

That’s the power of The Profit Wire!

As of writing – you can get one year of The Profit Wire for $1,495. You have a full 90 days to receive a full refund of your service, if you are unsatisfied for any reason.

As a charter member of The Profit Wire, you’ll get a new trade recommendation every week…

Giving you the chance to profit from the biggest news stories no one sees coming.

Meet Dave Gonigam – the editor behind The Profit Wire

Treading a fine line between contrarian thinking and conspiracy theory, Dave Gonigam explores the nexus of finance, politics, and the media for Agora Financial’s 5 Minute Forecast. He joined kindred spirits at Agora Financial in 2007 after a 20-year career as an Emmy award-winning writer, producer, and manager in local TV newsrooms nationwide

Dave Gonigam has been managing editor of The 5 Min. Forecast since September 2010. Before joining the research and writing team at Agora Financial in 2007, he worked for 20 years as an Emmy award-winning television news producer.