New Casey Report presentation features Nick Giambruno’s “Crisis Currency” Report where investors gain access to a near-perfect asset for any American who believes in the power of gold to preserve wealth, and the privacy and freedom of using cash. 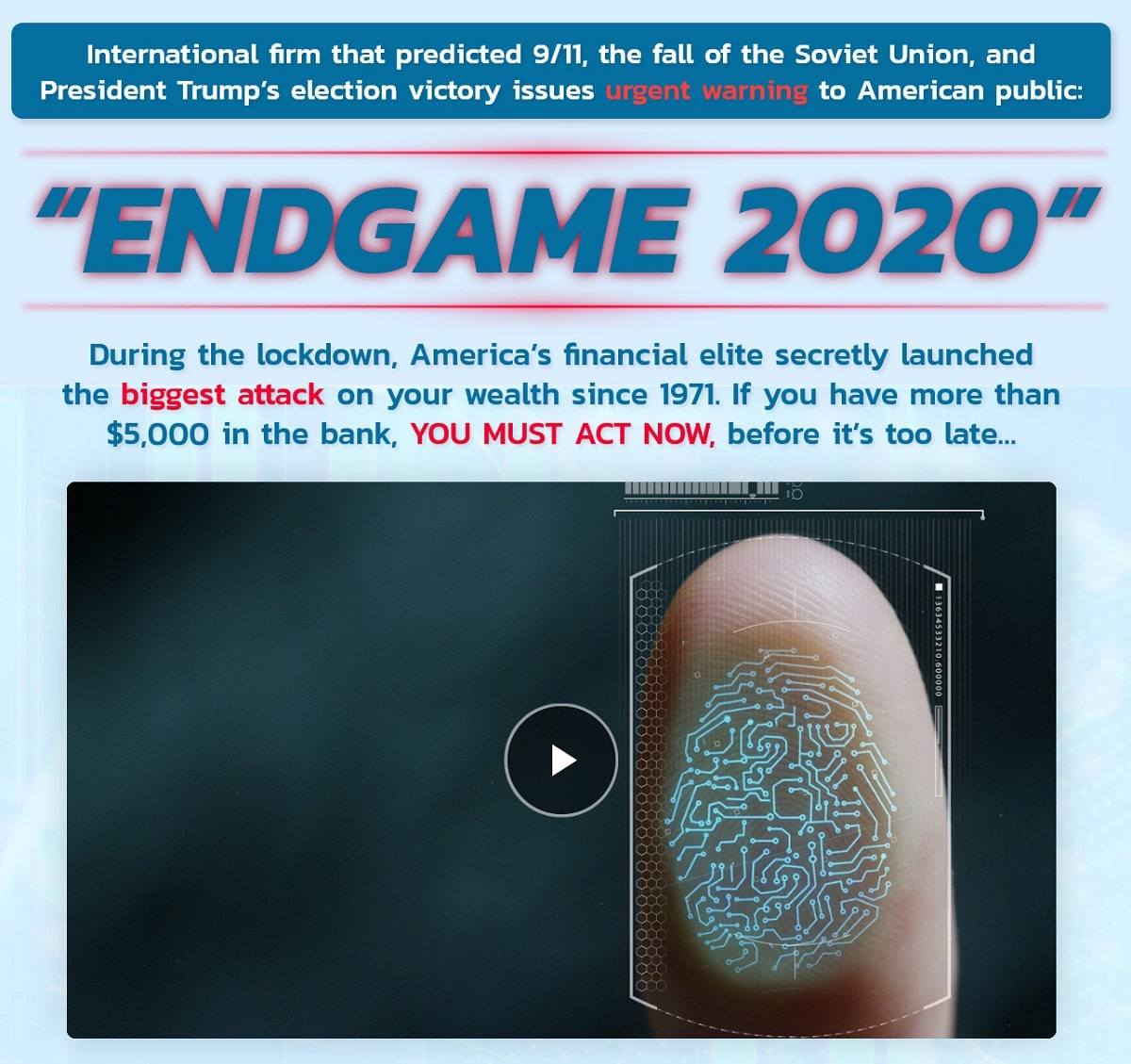 During the lockdown, America’s financial elite secretly launched the biggest attack on your wealth since 1971. If you have more than $5,000 in the bank, YOU MUST ACT NOW, before it’s too late…

The replacement of cash with a digital dollar is a disaster on par with the creation of the Federal Reserve… Roosevelt’s gold confiscation… and Nixon’s dollar shock.

For folks with more than $5,000 in deposits with America’s largest banks, this transformation of the American financial system will decimate their hard-earned savings.

America has seen three major shocks to its financial system since 1907… and each time, simply owning gold and silver wasn’t enough.

So, what should you do?

If you hope to emerge from this financial shock intact, you’ll need to consider buying an asset Nick Giambruno expects will soon surpass precious metals as the “hardest money” the world has ever known…

For thousands of years, gold and silver have been considered the world’s best safe-haven assets.

But there’s a different asset Nick would recommend to any American who wants to protect their privacy, while preserving their wealth with many of the same attributes as gold and silver – without the headaches and challenges of storage and transport.

It’s not a commodity, paper currency, or any stock, bond, or option…

And it doesn’t involve gold at all.

But it’s simple to buy and easy to store.

Nick Giambruno will show you everything you need to know in his brand-new special report called:

The New “Crisis Currency”: Why Every American Should Own at Least $100 of the Hardest Money the World Has Ever Known

This report plus 2 more:

…are free for investors when they subscribe for The Casey Report newsletter.

Led by multi-millionaire speculator and New York Times Best-Selling author Doug Casey, The Casey Report is one of the world’s most respected investment advisories.

Dubbed the ‘International Man,’ roughly four decades ago, Doug Casey has not only established residency in nearly a dozen countries, he’s visited 175 nations, and has been a major investor in businesses around the world.

He’s participated in several televised debates with Presidential candidates and served as an economic advisor to the leaders of six countries. He’s been a regular guest on national television when people want to know what’s going on in the global financial markets—including spots on CNN, Merv Griffin, Charlie Rose, Regis Philbin, and NBC News. Phil Donahue even devoted an entire show to his work.

Every month, Doug and his team of analysts provide specific, actionable ideas designed to help you make money in stocks, bonds, currencies, real estate, and commodities. This analysis is informed by boots-on-the-ground research and the highest-level contacts.

Doug and his staff have an extraordinary track record of getting big picture calls correct… and helping readers make huge returns.

In late October 2006, Doug Casey warned readers of a coming credit and housing bubble… long before the meltdown. He advised readers how to short two companies about to drop – a bank specializing in condo loans and an insurer of mortgage-backed securities. These netted gains of 90% and 93.3% at a time when most investors were losing their shirts.

Doug is widely respected as one of the preeminent authorities on “rational speculation,” especially in the high-potential natural resource sector.

Doug literally wrote the book on profiting from periods of economic turmoil: his book Crisis Investing spent multiple weeks as #1 on the New York Times bestseller list and became the best-selling financial book of 1980 with 438,640 copies sold; surpassing big-caliber names, like Free to Choose by Milton Friedman, The Real War by Richard Nixon, and Cosmos by Carl Sagan.

Then Doug broke the record with his next book, Strategic Investing, by receiving the largest advance ever paid for a financial book at the time. Interestingly enough, Doug’s book The International Man was the most sold book in the history of Rhodesia. And his most recent releases Totally Incorrect (2012) and Right on the Money (2013) continue the tradition of challenging statism and advocating liberty and free markets.

He has been a featured guest on hundreds of radio and TV shows, including David Letterman, Merv Griffin, Charlie Rose, Phil Donahue, Regis Philbin, Maury Povich, NBC News, and CNN; has been the topic of numerous features in periodicals such as Time, Forbes, People, and the Washington Post; and is a regular keynote speaker at FreedomFest, the world’s largest gathering of free minds.

Doug has lived in 10 countries and visited over 175. Today you’re most likely to find him at La Estancia de Cafayate (Casey’s Gulch), an oasis tucked away in the high red mountains outside Salta, Argentina. Cafayate most resembles the isolating beauty of Bryce Canyon, Utah combined with the lush vineyards of Napa Valley. Residents enjoy economic and social freedoms not found in the US and some of the best wine and golf on the planet.

Nick Giambruno knows that the best time to buy—as Baron Rothschild correctly observed—is “when there’s blood in the streets.”

He writes about geopolitics, value investing in crisis markets, the global cannabis market, international banking, second passports, and surviving a financial collapse, among other topics.

In short, Nick’s work helps people make the most of their personal freedom and financial opportunity around the world.

He’s lived in Europe and worked in the Middle East, most recently in Beirut and Dubai, where he covered regional banks and other companies for an investment house.

Nick is a frequent speaker at investment conferences around the world.

When you buy in, you receive the following:

12 Monthly Issues of The Casey Report

This is sent out the second Thursday of every month.

This report will give an incredible insight into opportunities that you can take advantage of investing in – and the chance to get in on high potential explosive gains before they hit the attention of the public eye.

Every single recommendation you find in this monthly report has been personally sought out by Casey and Nick and their research team, and they consider investment opportunities in every field from around the world.

The only criteria is that they’re as safe as possible, and in little known opportunities that most people wouldn’t have a clue existed.

Special Report #1: The New Crisis Currency: Why Every American Should Own at Least $100 of the Hardest Money the World Has Ever Known

Nick Giambruno will show you how to ‘internationalize’ your digital life, taking your information out of the hands of the U.S. government and big companies like Facebook and Google… and basing it offshore.

And finally,Nick Giambruno will give you a dead-simple way to guarantee your digital security that works 100% of the time. (Almost nobody in America takes this crucial step for privacy and security.)

Investors who are able to see this once-in-a-lifetime financial shock coming have the opportunity to earn incredible profits, even as most folks get hammered…

After the Federal Reserve was created in 1913, for example, folks who invested in silver could’ve earned an incredible 120%.

In 1933, when Roosevelt confiscated gold, investors who shifted some of their nest egg into Homestake Mining beforehand could have turned $10,000 into more than $24,000 in just two years!

And in 1971, when Nixon crushed the dollar’s value by ending its convertibility to gold… folks who were able to connect the dots before the shock could’ve turned a few ounces of gold into an absolute fortune — returning more than 5,200% at its high.

And Nick Giambruno expects a similar result as the digital dollar is rolled out.

In the days to come, Nick Giambruno predicts gold will shatter its all-time high…

That’s why Nick Giambruno have rushed to publish this special report to show you three ways to capture huge gains as government money printing sparks a gold mania in the months ahead.

The first opportunity is the easiest way he has ever seen to get exposure to physical gold—even if your local dealer runs out and the mint remains shuttered for the foreseeable future!

And finally, the third is a stock Nick Giambruno consider his #1 play for the approaching gold mania.

The regular price for a one-year subscription to The Casey Report is $199. But as a part of Nick Giambruno’s “ENDGAME 2020” presentation offer, you can subscribe for $49.

You’ll have the opportunity to try The Casey Report research for the next 60 days — completely risk-free.

If you don’t find The Casey Report perfect for you in every way, simply contact Customer Service team within the first 60 days of your membership. They will issue you a full refund, no questions asked

And replace it with a trackable, traceable… and most importantly… controllable form of digital currency the likes of which we’ve never seen before.

Put forth by Nancy Pelosi…

Supported by Bill Gates, the United Nations, and the IMF…

And instituted by the Federal Reserve…

Represents the biggest change to the dollar since at least 1971, when Nixon took the dollar off the gold standard.

Millions of hard-working Americans who’ve saved and invested for their retirement will be wiped out.

But if you’re able to connect the dots beforehand, you have the chance to sidestep this devastating financial shock…

By the end of this year, it’ll be easy to spot the dramatic contrast between folks who saw this shift coming… and those who were blindsided.

Click here to learn what you need to do before cash is permanently replaced.