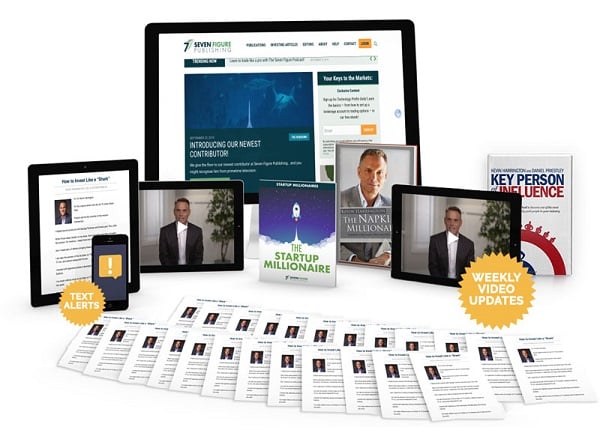 Kevin Harrington, the original Shark from Shark Tank, just found one of the best private deals he’s seen in years.

Now, he wants to reveal all of the details right now.

It’s a tiny, private startup company… that he believes is poised to explode into America’s next big company.

As he says, “This could turn every $50 into thousands.”

This could be like buying Apple, Google, Facebook, Intel, Ford, Walmart and all the other most famous companies…

When they were brand new. Long before anyone had heard of them.

Startup Millionaires Newsletter – What IS IT and How it Works?

There’s no better way to grow rich than being early — as early as possible to the start — that’s how you REALLY get rich on the best new companies.

Even a small investment can turn into something significant.

The problem is, until recently, if you weren’t already super rich — you couldn’t take advantage of life-changing plays that only accredited insiders were able to jump on.

Every month, Kevin will analyze thousands of startups and will walk you through what to look for when selecting a startup to invest in. Then, Ray Blanco — serving as a lead tech analyst/consultant —  will send you the select batch of companies that made the cut.

As of moment of writing, you can get TWO FULL YEARS of Startup Millionaires for $1,995.

When you get TWO FULL YEARS of private company research and deal recommendations from Kevin and his friends at Seven Figure Publishing.

You get all the gifts, videos, support…

PLUS… at least 48 deal opportunities coming your way in a constant stream.

He will refund every single penny of your $1,995 at the end of your two years.

Who is Kevin Harrington?

Kevin Harrington is the editor of Startup Millionaires and has been with Seven Figure Publishing since 2019.

Kevin Harrington has been a successful entrepreneur over the last 40 years. He is an Original Shark on the ABC hit, Emmy winning TV show, “Shark Tank.” He is also the Inventor of the Infomercial, As Seen On TV Pioneer, Co- Founder of the Electronic Retailers Association (ERA) and Co- Founder of the Entrepreneurs’ Organization (EO).

Kevin has extensive experience in business all over the world, opening distribution outlets in over 100 countries worldwide. His success led Mark Burnett to hand pick Kevin to become an Original Shark on Shark Tank where he filmed over 175 segments.