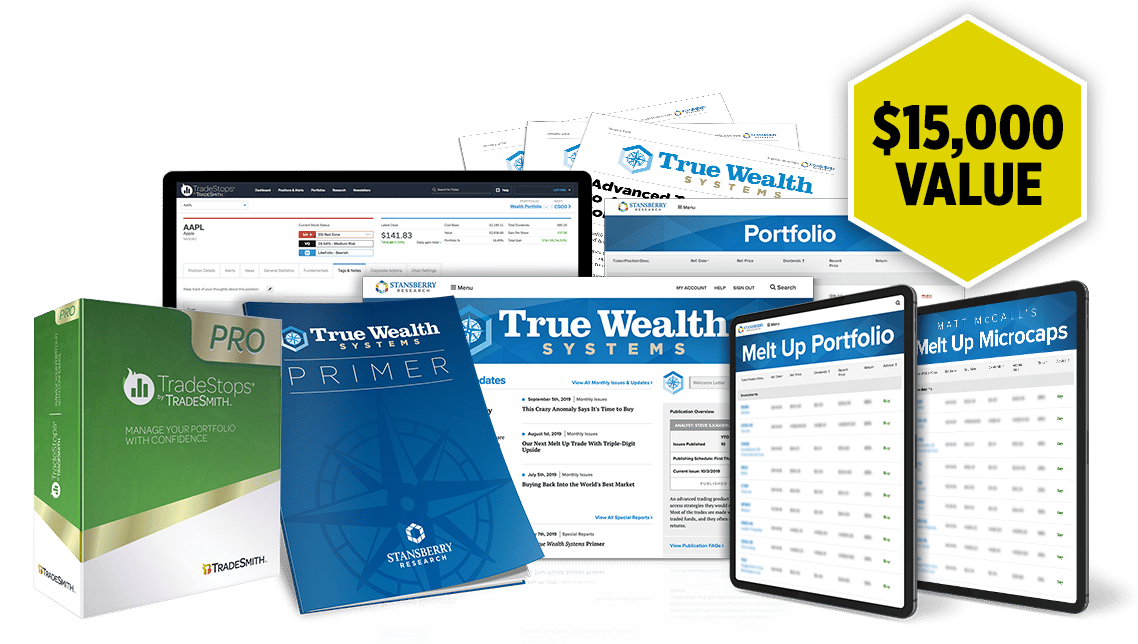 What’s Included with Your 2020 Melt Up Subscription (State Of The Melt Up)?

Here’s a complete breakdown of everything you’ll get when you subscribe:

One Year of True Wealth Systems

All the smaller, lesser-known opportunities you need to profit during this new phase of the Melt Up.

A model portfolio of early-stage companies that will change the world. It only takes one hit to make a huge amount of money in these high-growth stocks – especially during a Melt Up. You’ll also begin to receive Matt’s daily email service Matt Mccall’s Money Wire, where he updates you daily on what’s happening with the most important mega-trends in the stock market.

Matt McCall’s Melt Up Microcaps Portfolio – What is it?

One FREE Year of TradeStops Pro

The best way to protect yourself from the inevitable Melt Down. TradeStops has helped over 50,000 investors to track more than $20 billion in portfolio value with this proven software.

See why many of the world’s smartest investors – including Warren Buffett, Bill Gates, George Soros, Elon Musk, Jeff Bezos, and Jim Rogers – are all investing in China right now… and how one of Steve’s subscribers told us, “I made enough money with your True Wealth Opportunities: China to purchase a 2018 $60,000 SUV in a little more than 3 months.” You’ll learn of dozens of opportunities to make profits like this in your FREE bonus research service.

This year, Dr. Sjuggerud finally found a way to share the same kind of exciting real estate deals he’s invested in with you too. In True Wealth Real Estate, he combines private investment opportunities with stock market recommendations with plenty of ways for you to profit no matter how much money you are willing to invest.

One FREE Year of True Wealth

The Melt Up Portfolio

This completely done-for-you model portfolio contains nine stocks which Dr. Sjuggerud predicts could each return between 100% and 1,000% during the Melt Up.

Special Report: My Top Nine Melt Up Investments: How to Make Hundreds-of-Percent Gains in This Market Mania

Dr. Steve Sjuggerud estimates that his favorite stock (which you’ve probably never heard of) could go up as high as 500% in the next 6 to 12 months.

Video of Steve’s FULL presentation from the Stansberry Alliance Conference in Las Vegas.

The information Steve shared in this closed-door meeting is normally off limits to the public and reserved exclusively for our Alliance “Partners” – a membership group that currently costs more than $30,000 to join. This presentation is a must-see for anyone who’s serious about making extraordinary gains in the stock market this year and in 2021.

As a part of Dr. Steve Sjuggerud’s State Of The Melt Up offer, you can get True Wealth Systems plus everything listed above at the special price of $2,500.

Is There Any Guarantee or Refund Policy in Place?

There’s no refund policy in place, but Steve offers his 100% satisfaction guarantee. It includes:

Here’s what that means…

Take the next 30 days to look over everything included in this offer. Print out the model portfolios… look at hundreds of back issues and special reports… give TradeStops Plus a test drive… as well as all the other special bonuses you receive.

If for whatever reason you are not satisfied with what you receive, just call Customer Service team at 1-888-261-2693 and receive 100% of the money you spend back to you in the form of Stansberry Credit.

This credit is good for an entire year and can be applied toward any other 20+ Stansberry Research products of your choice.

This Special 2020 Melt Up offer will expire soon… Act FAST!

Dr. Steve Sjuggerud’s State of the Melt Up Event has been scheduled to take place on Wednesday, October 21st at 8pm Eastern, when Steve will make a major announcement about what to do with your money before the end of the year. You’ll learn exactly where to put your money next – including the name and ticker symbol that could grow your money as much as 1,000% in the coming months. 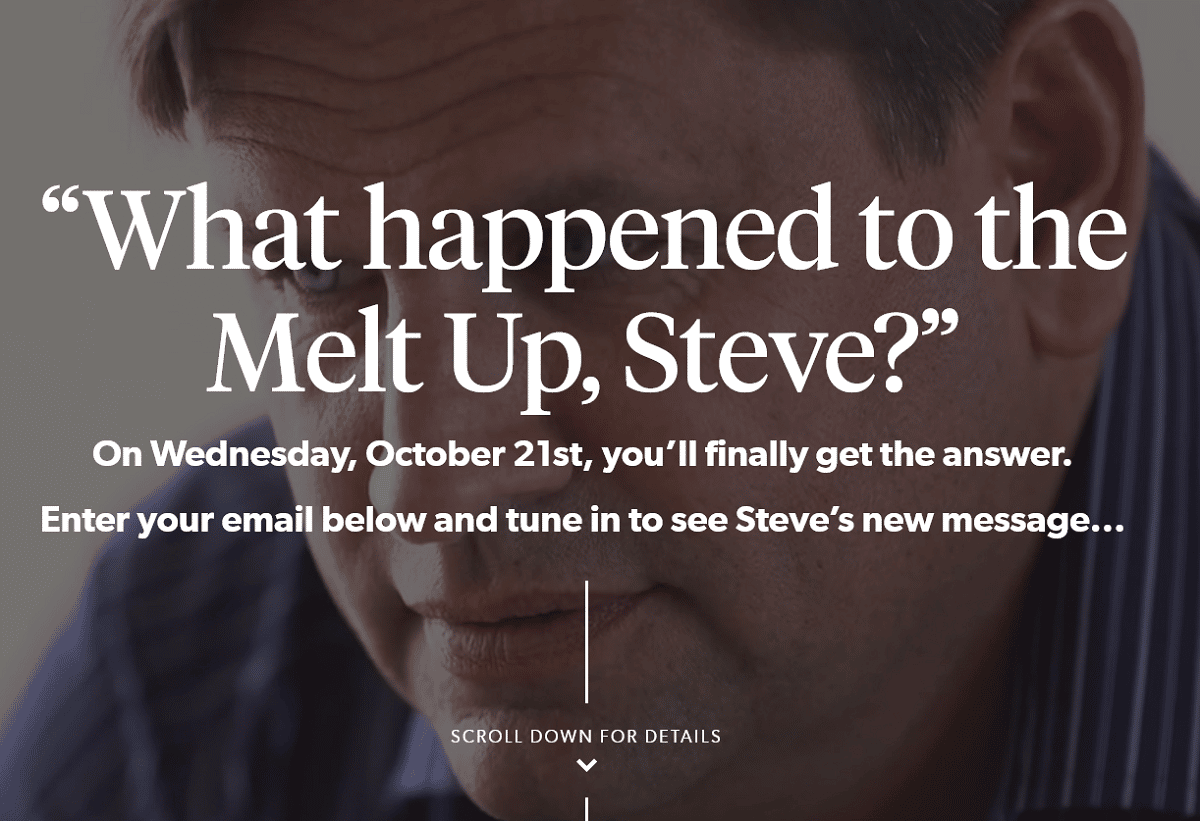 Dr. Steve Sjuggerud’s State of the Melt Up Event has been scheduled to take place on Wednesday, October 21st at 8pm Eastern, when Steve will make a major announcement about what to do with your money before the end of the year. You’ll learn exactly where to put your money next – including the name and ticker symbol that could grow your money as much as 1,000% in the coming months.

What Is Dr. Steve Sjuggerud’s State of the Melt Up Event?

Just three weeks after the S&P 500 hit its all-time high – the COVID-19 crisis killed the longest bull market in history.

And the Melt Up we were waiting for came to a grinding halt. Since then, stocks have recovered 50% as the federal government tries to right the ship.

Something big is brewing in the financial markets.

And it’s not the Melt Up Dr. Steve Sjuggerud first saw coming back in 2015.

“It feels like the crisis changed everything – how we do business, shop, even spend time with our families.

But most importantly for your money: It changed the Melt Up.

So it’s time to throw out the old playbook.

And prepare for a MUCH wilder ride…”

Dr. Steve Sjuggerud has been tracking a string of strange anomalies in the stock market. And he finally got the signal he was waiting for. He hasn’t seen anything about it in the mainstream financial media. Even though some of the biggest players on Wall Street just quietly changed their short-term market forecasts.

But on October 21st, the truth about what’s headed for our country’s financial markets is finally coming to light.

Dr. Steve Sjuggerud believes it could be historic day for you and your money – if you follow his exact instructions.

For the first (and only) time Dr. Steve Sjuggerud will share the full details on Wednesday, October 21st at 8pm Eastern – at his State of the Melt Up event.

If you’ve been watching stocks climb higher and are wondering what happened to Dr. Steve Sjuggerud’s Melt Up thesis – he has some surprising new developments you need to know about.

Because if you have any money in the market today, this will directly impact the way you think about your wealth.

Even if you’re familiar with Steve’s Melt Up work – we guarantee you are not currently prepared for what’s coming. As you’ll hear on October 21st, new political, economic, and social forces are combining to create a perfect storm in the stock market.

As a result, the decisions you make in the coming weeks could affect your wealth for the next 10 years.

He believes that you don’t have to take big risks to make big returns.

Since Steve joined Stansberry Research in 2001, he has found super-safe, profitable investment ideas for his subscribers that the average investor simply never hears about… until the big gains have already been made.

For example, Steve recommended buying gold back when it was trading around $320 an ounce. Then he made one of his biggest, most important calls to date – the “Bernanke Asset Bubble.” – when Federal Reserve Chairman Ben Bernanke promised to keep printing money to save the economy. True Wealth readers saw gains of 419% in health care, 133% in technology, and 96% in biotech, among others.

Dr. Steve Sjuggerud gained national attention for accurately predicting the dotcom crash, the housing bust, Dow 20k, and the raging bull market of the past 11 years.

But what’s coming on October 21st is likely to be the biggest prediction of his career. And you’ll learn exactly where to put your money next – including the name and ticker symbol that could grow your money as much as 1,000% in the coming months.

When Is Dr. Steve Sjuggerud’s State of the Melt Up Event?

Dr. Steve Sjuggerud’s State of the Melt Up Event has been scheduled to take place on Wednesday, October 21,2020, at 8 pm ET (or 5 pm PT, 6 pm MT, and 7 pm CT). It is important to note here that this event has limited spacing, so the sooner one signs up, the more likely they are guaranteed a seat.

How to Sign Up For Dr. Steve Sjuggerud’s State of the Melt Up Event?

To get access to Dr. Steve Sjuggerud’s State of the Melt Up Event, all individuals have to do is enter their respective emails here. When you do, Dr. Steve Sjuggerud will send you a brand-new special report that answers one of the most common questions he received over the past few weeks:

Is the Melt Up Back?

Please be sure to read this before next Wednesday. It contains critical information you need to get the most out of Dr. Steve Sjuggerud’s State of the Melt Up Event.

Upon entering, those residing in the U.S. (or have a U.S.-based phone number) will also be presented with the chance of becoming VIPs. When you become a VIP, you’ll receive instant access to an exclusive special report, called: Steve’s No. 1 Gold Pick.

Now that Central Banks around the world are printing money at unprecedented speed, Steve has released a new gold recommendation to help you profit and protect your savings. And the only way to learn about it is in his comprehensive new report: Steve’s No. 1 Gold Pick.

This is an opportunity you can invest in right now – without having to wait for October 21st. And this special report isn’t available to the general public. Typically, only Steve’s paid-up readers are given access.

But as a “thank you” for joining the VIP list, Dr. Steve Sjuggerud will send you a free copy.

To help you prepare for the big night, Steve’s team has created a private website specifically for event attendees.

There you’ll find valuable research and resources to help you hit the ground running when Steve goes live on October 21st.