The Million Dollar Project – What is it?

The goal of The Million Dollar Project is simple – to help you grow an unlimited pool of wealth in a low-risk, high-reward format.

In order to do so, editor Bob Byrne turns to “special situations” in the market, particular circumstances or catalysts that trigger substantial movements in a stock. The returns can be tremendous from market events such as IPOs, corporate spinoffs, major catalysts and more.

You’ll be able to grow your wealth by following his meticulous research and instruction.

Who the heck is Bob Byrne?

Bob Byrne is a full-time private daytrader with more than 15 years’ experience. His trading relies on technical analysis and focuses primarily on the energy sector.

Bob holds a business degree from St. Edward’s University in Austin, Texas. He lives in Park City, Utah, with his wife and two daughters.

He has never worked at a hedge fund or a financial institution. Bob started trading back in college, and he made around 1,100% on his very first trade. After that, he was hooked. He started devouring books, taking courses and spending hours a day studying the markets.But after interning at a major financial institution, he realized something…

Wall Street is the most corrupt and despicable place on earth. Once Bob saw what was really going on behind the scenes…he dedicated all his time to his own trading account.

And eventually he became one of the most successful independent traders in America.

Bob was moving millions of dollars with every single trade he made.

Which added up to billions in trading volume every year.

Just take a look at these trading statements: 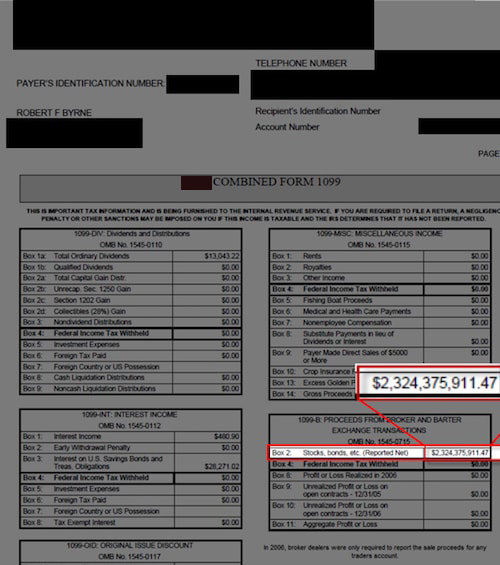 That’s $2.3 billion in trading volume — more than many hedge funds move — and he did it all on his own.

While Bob was trading all of that money, he was able to see things in the markets that most investors completely miss.

He discovered strategies that not even the smartest hedge fund managers on Wall Street knew about at the time.

It seemed that there were predetermined dates when a certain class of stocks would ALWAYS skyrocket.

He started digging into this phenomenon.

I called other traders… I dug through back tested data… ran technical simulations… and after months of research …he discovered how to use this calendar in his own trading account.

I could tell you the results were phenomenal, but here – his tax returns speak for themselves. 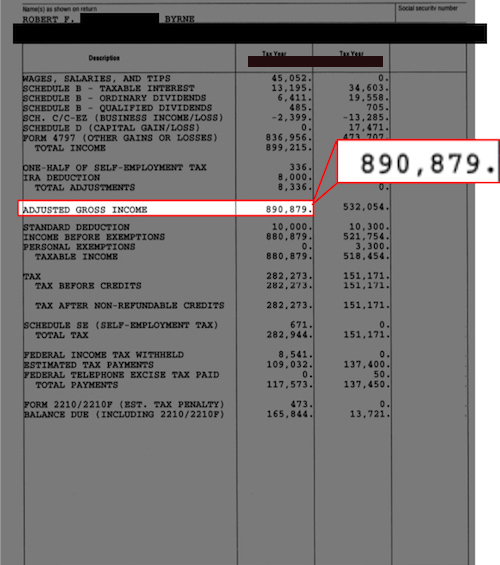 Needless to say, he made a lot of money using this strategy.

Now this strategy is open for a public and he calls it The Million Dollar Project.

The Million Dollar Project – What you gonna get for your money?

I can verify that this stock fits my M.O.N.E.Y. criteria perfectly.

Inside that email, you’ll find all the details on this tech play that could put as much as $104,770 in your pocket in the next few weeks.

And that’s just the beginning…

As a member of The Million Dollar Project, you’ll get one new recommendation at least once a month…

Giving you the chance to pocket a BIG payday at least 12 times a year.

Here’s what you get when you join The Million Dollar Project:

What Makes The Million Dollar Project Different From Anything I’ve Seen Before?

For the first time ever, James Altucher will be investing $1 million alongside the rest of my readers. You’ll have a full 48 hours to get in and out of these picks before he does.

The Million Dollar Project – How Often Can I Expect to Receive an Alert?

At least once a month, I will identify a special situation in the market.

As soon I’ve conducted my analysis and I’m 100% certain that my pick has upside potential, I’ll send you an email with the exact instructions on how to profit… the exact setup, what trade to make and when to take any profits.

The Million Dollar Project – Can I Place These Special Situation Trades in My IRA?

Absolutely. You can place these trades right from your retirement account with no problem.

Before we get started with today’s review, there’s something I’d like to thank you for stopping by to check out my Review of The James Altucher’s Secret Income Program.

I’m an actual member of Altucher’s Secret Income, so in this review I hope to shed some light on what’s inside, if I think it’s worth the money, and a lot more.

Just to share an important tidbit of information about me, I’m one of those guys that likes being honest about things…this means I never actually review a service unless I get it first (even if it’s $2,000), go through it, use it, and make sure it actually delivers on what it promises.

Having said that, let’s start off with what’s James Altucher’s Secret Income Program :

What is Altucher’s Secret Income?

James Altucher’s Secret Income is a lower risk strategy to create a steady income on a weekly basis $600, $800, or $1000 bucks per week. And this is done by legally exploiting an instant cash loophole.

It’s a research service, and will show you a brand new instant income move every single Tuesday. This is a brand new service from James. And it’s totally different to pretty much anything out there because it creates INSTANT income.

You don’t need billions or even millions of dollars.

You don’t even need a college degree.

That’s it. And yes, just about any of the most popular online brokers will do. Once you make the move, it takes just seconds for the cash to land in your account. You could spend it right then if you like. Or save it for later. There aren’t really many “instant” rewards on Wall Street.

Or anywhere else in life for that matter. But this one move really is one of the rare exceptions. When you apply it to the stock market, you’ll see a cash result — every single time — land in your account in about two minutes or less.

It’s yours to keep, no matter what. That’s why I always say that, hands down…

This income secret has nothing to do with buying bonds, precious metals or risky options. It’s not forex trading, day trading or a junk bond. And it doesn’t involve waiting months to collect dividends.

That’s why we call it a “loophole.”

Without doing the things MOST people do to squeeze passive income out of their retirement savings.

Every week James is going to show you how to collect safe, steady income using this powerful technique.

As you saw in his demonstration videos – filmed live on the streets of New York – it took less than three minutes to collect $322… $647… and even $687 in instant income.

Here’s everything you’ll get as newest member…

Secret Income Alerts, One Every Week

Every Tuesday morning – for a full year – you’ll get an instant income alert from James with crystal clear instructions on how to tap this incredible market “loophole.”

Secret Income: How to Collect At Least $24,000 a Year Extra INSTANT INCOME

This is your instant cash primer on how to get started. Inside you’ll see how to collect at least $2,000 every month in instant cash… or at least up to $24,000 in extra money per year… guaranteed, or you can get an extra year of research free.

How to Choose The Best Brokerage Account For You

Just about every popular online broker in America can accommodate this special instant income technique. This report shows you how to get set up. It’s easy!

Once you’re up and running, there are other little secrets about maximizing your instant income that you’ll want to know. James puts it all on the table for you, in quick, easy-to-watch videos.
And of course, you’ll get…

This stock market “loophole” works so fast, you could cover the cost of your entire signup fee… within minutes of getting started, with the five instant income moves in this report.

You’ll also get, as an unannounced bonus and absolutely FREE…

An unlimited lifetime subscription to our special executive series newsletter, the 5 Minute Forecast.

And a FREE subscription to James’s daily briefings, the incredibly bold and controversial, Altucher Confidential.

Who’s Behind The Altucher’s Secret Income?

James Altucher is an American hedge fund manager, entrepreneur, best-selling author, venture capitalist, and podcaster. He has founded or co-founded more than 20 companies, including Reset Inc. and StockPickr, and says he failed at 17 of them.

Normally, the list price for a service like Altucher’s Secret Income is $3,000 for a full year, but you won’t pay that. Instead with today’s special invitation we’re only asking you to pay an incredibly low $2,000 for a full year of membership…

And that includes the instant-reimbursement blueprint, which shows you how to recoup at least that much with five instant income plays as soon as you sign up.

This is an amazing deal!

Especially when you consider everything else you get, once you’re among the 300 today who sign up…

Will Altucher’s Secret Income Work For You?

Here’s what I can tell you for sure: When James shows you one of these instant income moves – every week – the way it works, you absolutely CAN tap the market for instant cash… every single time. The money arrives in minutes, after starting these plays.

And yes, it’s true – it’s so predictable a move, you can estimate how much you’ll pocket even BEFORE you follow the steps each alert will provide.

As with any strategy in the stock market – and all investments – there are risks. And you’re smart. You know that nobody can guarantee you’ll always make money. On the full cycle of some of these trades, there are rare times when you might not.

On the other hand, our testing shows an incredible record of success – nearly 100% perfect – and James has been doing this strategy himself for at least 15 years. He says often, it’s the one market income strategy he would teach his own daughter.

Just remember, you can’t make any money with this strategy if you don’t act – and we shut the doors today after the first 300 people who agree to sign up! Use the form on this page to get started or risk losing your place, the free startup kit and reports, your laptop, and all those weekly opportunities for extra income.