It was especially bold coming out of the tough correction from October into December that dropped stocks nearly 20% from their highs. The CNN reporter interviewing me, Richard Quest, was skeptical. In fact, he bet me dinner on it.

Free dinners taste the best. The S&P 500 did gain 25%. It actually performed even better than that.

So guess what I did last week?

No, I didn’t get my dinner. I’m still waiting for that. But I was interviewed once again on CNN Business… and I said the same thing as last year – that the S&P 500 will be up as much as 25% at some point this year.

I plan to collect on last year’s wager, and we upped the ante for this year’s bet to a steak dinner and a bottle of expensive wine. I plan to collect this time, too – because I’m that confident in my prediction for 2020.

Let me tell you why… and where to find the best opportunities of this bull market. 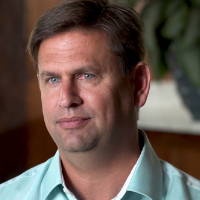 Time is running out…

If you skipped the 2020 Melt Up Event, watch by tomorrow. You’ll hear Dr. Steve Sjuggerud’s surprising prediction about where this bull market is heading next, and exactly what it means for your wealth (hint: it’s not what you think). Plus, you’ll hear about the nine stocks Steve believes should be on everyone’s radar by tomorrow’s opening bell.

I’m bullish for a lot of reasons. Interest rates are low… Inflation is low… Corporate earnings are growing… And stocks are not overvalued based on forward price-to-earnings projections.

I told Richard Quest how these technological innovations will create trillions of dollars in economic value over the coming years.

I also told him how much this year resembles 1990. Stocks were enjoying an eight-year bull market when the 1990s began, and a lot of folks said it was about to end. They couldn’t have been more wrong. That decade ended up being the best 10 years in stock market history.

I get angry when I think about all the profits people missed out on because they were afraid to buy after the strong run.

And that’s my message to you today, tomorrow, next week, and next year. As we enter 2020, you must be in stocks if you want to grow your wealth. 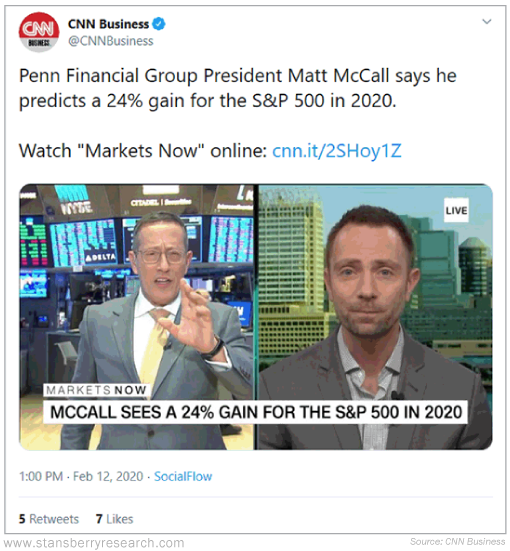 There will be dips and even full-blown corrections along the way, but the long-term trend is relentlessly higher. There is no better way to grow your wealth, achieve your financial goals, and live the life you want than to invest in stocks.

So, how do you take advantage of it?

The best way to make big money in the coming years is to invest in smaller companies… especially the best microcap stocks in the market.

Because small companies have such great potential to grow wealth, I believe everyone should have a portion of their portfolio in small stocks before they grow large.

I can also tell you that microcap stocks are where I’ve found the best trades of my career. After accompanying a friend into an Ulta Beauty (ULTA) store when that company was only valued at $1 billion, I researched the business and loved what I saw. My Ulta recommendation soared 2,043%.

Last week, I joined my friend Steve Sjuggerud to talk about the markets, and I shared one of my latest recommendations on air. It’s a company that uses AI to develop new drugs. The future of drug discovery will rely on AI technology… And this company is at the forefront.

It currently has a robust pipeline of drugs, two of which are in Phase III clinical trials with potential approval this year. In fact, the company’s market cap expected to rise well into the billions in the next few years – a monumental milestone, considering that it currently sits at $700 million.

Because this company is small, it will only take one or two approvals for the stock to become a 10-bagger and the next household biotech name.

That’s the kind of scenario that moves stocks. And small tech companies with big growth potential are the kinds of stocks you want to own right now.

Music has Mozart… Physics has Einstein… Trading has Andy Krieger.

Andy stands among the trading titans for “Breaking the Kiwi”…

Betting against the New Zealand dollar…

And making $300 million in profit.

And, on Thursday, February 20th, 2020 – for the first time in history – he’ll finally break his silence…

And talk about it – LIVE – on camera.

More urgently, he’ll give you the details on the next major market event that could CHANGE EVERYTHING.

Editor’s note: During our Melt Up event last week, Matt sat down with Steve and gave away the name and ticker of his AI recommendation… which he believes could ultimately return 10 times your money. But if you missed it, you can still watch a replay to learn the name of this stock – along with Steve’s latest bull market prediction.

Watch the video here before it goes offline.