Meat alternatives were a big topic in 2019… And Beyond Meat (BYND) is the poster child.

Since its initial public offering (“IPO”), the company’s shares have been highly volatile. The stock has made 53 moves of more than 5% – up or down – since its IPO.

That’s roughly one out of every three days since it began trading. And the most recent was a huge 18% jump that happened only yesterday.

The massive moves higher and lower remind us of the dot-com bubble IPOs. Stocks that move this much tend to end up in the news – especially when they’re also helping popularize a market, like meatless meat.

Since launching Altimetry, we’ve received many questions from subscribers about Beyond Meat. Some readers want to know if the stock will be able to bounce back to its previous highs… while others wish to know how low it can fall.

But to understand what this stock is likely to do next, we need to dig into the market’s expectations… and see whether Beyond Meat can live up to them. 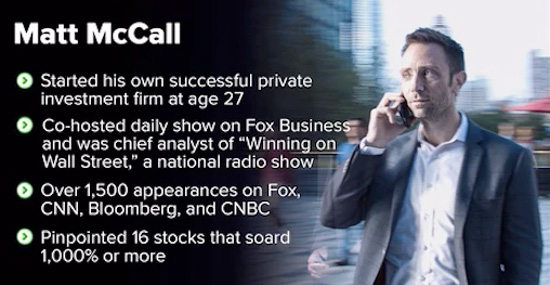 34-yr-old Matt McCall made history when he predicted five 1,000% winners on national TV. Now he’s doing it all over again. 200 stocks he’s recommended soared 100% or more. Sixteen recommendations soared 1,000% or more. And he just went public with his #1 pick for the new year. If you’ve ever wondered how legendary investors find stocks that shoot up 10X, and how you can do it too…

In the investing world, IPOs generate a lot of buzz. Currently, investors are on the hunt for what the venture capital industry calls a “unicorn.” (Unicorns are privately held startup companies with a value of more than $1 billion. One of the first unicorns was Google in the 1990s.)

This is one reason investors were so interested in the Beyond Meat IPO. With an initial price of $25 per share, the implied market valuation of the firm on May 1 was $1.46 billion. With a business model that targets the rising demographic segment of vegetarians and vegans, excitement continued to build after the IPO on May 2.

Investors were also excited about Beyond Meat’s strategy. Even before the company went public, it had a steady flow of partnership announcements with major companies. It has either announced partnerships, or explored potential partnerships with Dunkin’ Donuts, McDonald’s, and Subway, just to name a few.

By Friday, May 3, the stock was trading near $66 per share… And prices rose steadily over the next three months to a high of $235.

However, since July, Beyond Meat has mostly taken a nosedive. It fell to $75 per share by late 2019, before rebounding recently to $125. Renewed stories about partnerships have revived the stock. And the buzz doesn’t seem to be slowing down…

Earlier this month, the company got two major pieces of good news. Its competitor Impossible Foods decided to step away from efforts to partner with McDonald’s.

Just as important, McDonald’s announced that it plans on moving forward with its Beyond Meat “P.L.T.” sandwich trial – featuring a plant-based patty – and expanding the number of stores that will offer it.

Some have stated the McDonald’s relationship could mean upwards of $200 million in incremental sales for Beyond Meat. Beyond Meat had $92 million in revenue in Q3 2019, and adding McDonald’s sales would increase that revenue by more than 50%.

No wonder the stock has rallied so strongly… 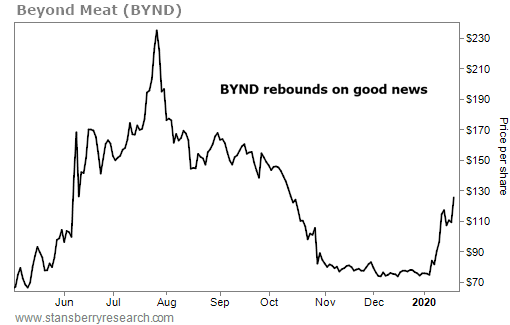 But while the news is potentially exciting, it is important to put it in the context of what the market expects the company to do… and whether those expectations are reasonable. This is the first step to investing that we follow at Altimetry.

We can use this clean data to not just understand how a company is performing, but also what the market expects the company to do. At any stock price, the market has an expectation that the business will achieve a certain return to warrant that valuation.

Today, this tells us something important. Even after its drop, Beyond Meat isn’t cheap… The stock would need to double every two years for the foreseeable future – as well as raise its Uniform Return on Assets (“ROA”) above 70% over the next few years – to justify current valuations.

The chart below shows Beyond Meat’s ROA and asset growth (dark blue bars) measured by Uniform Accounting, versus what Wall Street analysts think the company is going to do this full year and next year (light blue bars). The white bars show what the market expects Beyond Meat to reach over the next few years to warrant its current stock price. Take a look… 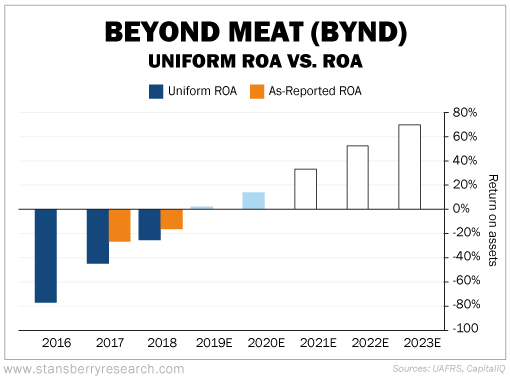 Not only that, but Uniform Accounting shows Beyond Meat’s ROA is even worse than the as-reported numbers (see the orange bars in the chart above) have suggested.

For context, the highest-returning packaged food companies are J.M. Smucker (SJM) and Hostess Brands (TWNK), with Uniform ROAs of 29% and 30%, respectively. Most of the meat companies that Beyond Meat would compete with have Uniform ROAs below 15%. This highlights how extremely high market expectations for Beyond Meat are.

Just look at the company that’s been a big driver for Beyond Meat, fast-food giant McDonald’s (MCD)… The company has seen impressive performance over the past 20 years, but currently only has a Uniform ROA of 15%.

As competitors continue to muscle in on the plant-based burger space, it will be hard for Beyond Meat to charge large premiums for its products… which the company will need to do to justify its current valuations.

Despite Beyond Meat’s long fall, using Uniform Accounting, we can see the market is still too optimistic about the stock today. And that means the losses are just getting started for this popular IPO.