Michael Robinson COVID-19 Investor’s Portfolio is part Michael Robinson’s Nexus-9 Network service where he details the three companies he believes will end up winning the race to develop a vaccine for COVID-19. 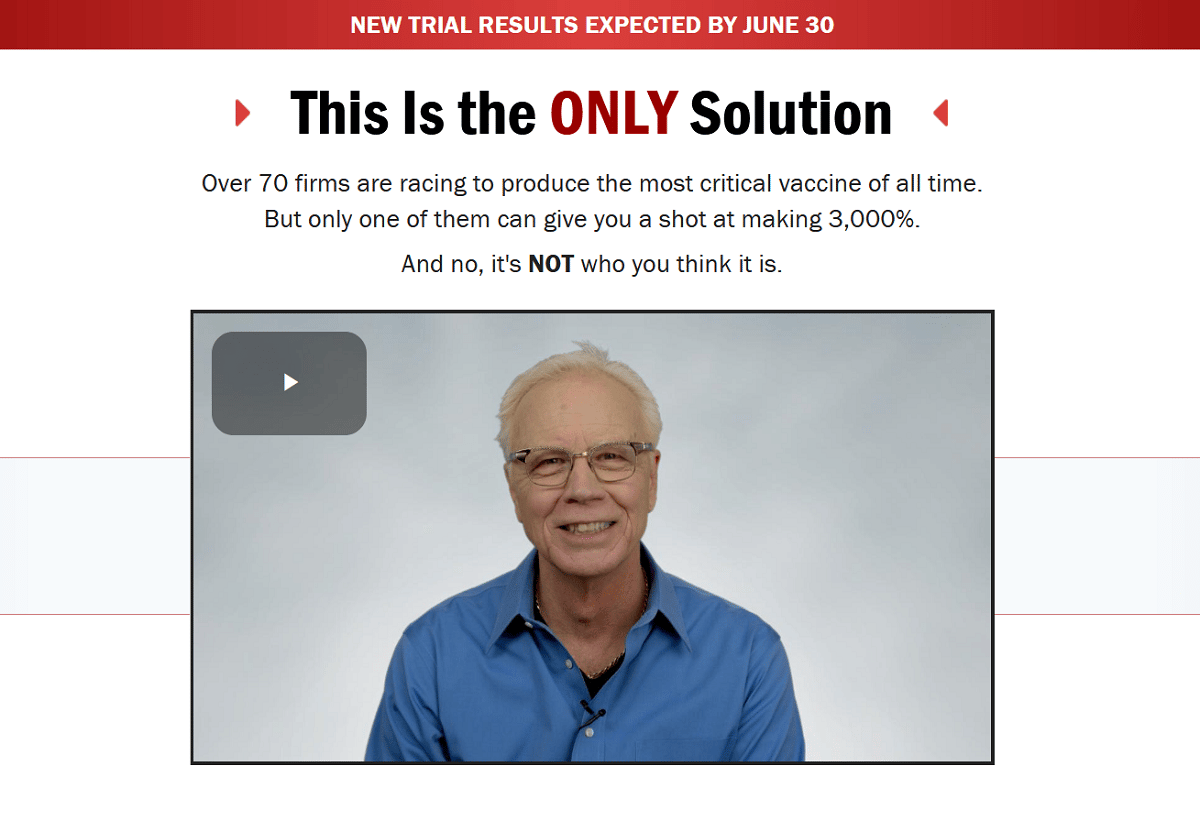 Companies that are developing a vaccine for COVID-19. Over $12 billion has been invested into these companies, and the race is officially underway.

The only problem is…

With 70 companies now racing to produce a viable vaccine…

Ever since California issued a statewide “stay at home” order on March 19… Michael Robinson reached out to every CEO, scientist, vaccinologist, and biochemist in order to find out who is likely going to win this race…

So today, he’s ready to tell us that one company is far ahead of everyone else….

Who is Michael Robinson?

Michael A. Robinson is a 36-year Silicon Valley veteran and one of the top technology financial analysts working today. That’s because, as a consultant, senior adviser, and board member for Silicon Valley venture capital firms, Michael enjoys privileged access to pioneering CEOs, scientists, and high-profile players. And he brings this entire world of Silicon Valley “insiders” right to you…

This all means the entire world is constantly seeking Michael’s insight.

In addition to being a regular guest and panelist on CNBC and Fox Business, he is also a Pulitzer Prize-nominated writer and reporter. His first book Overdrawn: The Bailout of American Savings warned people about the coming financial collapse – years before the word “bailout” became a household word.

For the first time in history, every country on the planet has been stricken with the same virus at nearly the same, exact time. The only solution is a vaccine. This is why any company that even mentions it’s working on a COVID-19 vaccine right now is going absolutely haywire!

Michael Robinson’s COVID-19 Investor’s Portfolio is a brand new blueprint where you can find the names and ticker symbols of three companies which Michael Robinson thinks will win the race to produce COVID-19 vaccine. Michael claims that one company is far ahead of everyone else.
In fact, they’ve been testing their COVID-19 vaccine on humans since early April.
Results from these trials are scheduled to drop no later than June 30, 2020. Once this happens, Michael Robinson expects the stock to go up 3,000% in record time.

In fact, the CEO is so confident in the outcome of these trials, he’s already announced that the first million doses of the vaccine could be distributed for emergency use in a matter of months.

You can find the name of this company plus two more into Michael Robinson’s COVID-19 Investor’s Portfolio.

Inside, Michael Robinson will detail the three companies he believes will end up winning the race to produce the COVID-19 vaccine:

The only way you can gain access to this vault is if you become a member of the Nexus-9 Network.

What is Michael Robinson’s Nexus-9 Network?

Michael Robinson was there when, according to Forbes, “an astounding 25% of the Forbes 400 made their billions in technology.” In fact, Michael helped make those fortunes happen!

As a Pulitzer-Prize nominated writer and venture capitalist, he was one of five people involved in early meetings for the $160 billion “cloud” computing phenomenon. He was on the scene as Lee Iacocca and Roger Smith, the CEOs of Chrysler and GM, led the robotics revolution that saved the U.S. automotive industry. And as cyber-security was becoming a focus of national security, Michael was with Dave DeWalt, the CEO of McAfee, right before Intel acquired his company for $7.8 billion.

But Michael wasn’t content. Because, while so many connected insiders were getting rich, he knew that the average investor was getting shut out.

That’s where you come in.

Michael left the labs and board rooms of Silicon Valley working for them and began sharing his investing knowledge, contacts, and 35 years of experience with the investors who’d never had the opportunity prior.

That’s when the plans to build the Nexus-9 Network came to fruition. Now, average investors are making fortunes of their own as part of this tribe.

What Do You Get For Your Money with Michael Robinson’s Nexus-9 Network?

Michael Robinson will send you a complete investment deck packed full of his research and analysis. This is what it means to belong to a network.

Your membership is backed by a STRICT performance guarantee.

He will process you a full refund of your subscription fee.

So let’s say you join today…

And over the next year, only 40 of the 52 trade recommendations you receive from him are profitable.

As incredible as those results may be…

Which means you can call customer service at that point and ask for a refund. You’ll get all of your money back. No ifs, ands, or buts. That’s regardless of how the model portfolio as a whole is doing.

You could be sitting on a net gain of 1,000%, and Michael Robinson would STILL honor this guarantee.

When you become a member of Michael Robinson Nexus-9 Network….

Michael is going to walk you through every step you need so you can potentially make a fortune off these vaccine stocks.

The race to develop a COVID-19 vaccine is now running at full speed. The winners could undoubtedly produce the most phenomenal gains in stock market history.

That’s $12 BILLION going into one small niche of the market. All for the purpose of securing a COVID-19 vaccine.  And once a vaccine does reach the market (and I’m 100% confident it will)…

How many people do you think are going to take it?

With COVID-19 now affecting 213 countries around the world…

We may see HALF the world’s population – that’s nearly four billion people – looking to get their hands on this.

The sheer magnitude of money that some of these vaccine companies could come into is STAGGERING.

That’s why I believe you’d be a fool NOT to Invest in these companies now!