The price of natural gas almost always blasts higher at some point during the fourth quarter of the year.

That makes sense. Temperatures fall. People use natural gas to heat their homes. And, the price of natural gas goes up because of the increased demand.

So, buying natural gas as we head into winter seems like an easy, no-brainer strategy.

But, as anyone who has been around the financial markets for more than a week can tell you, there is no such thing as an easy, no-brainer strategy.

The problem is that it’s hard to get the timing right on a natural gas rally.

For example, back in 2016, the price of natural gas fell 20% in October before it reversed and rallied 40% into the end of the year. If you were one week too early buying natural gas, you probably would have stopped out of the trade for a loss before the price turned around.

In 2017, the price of natural gas fell almost 20% between Thanksgiving and Christmas. It recovered that entire loss by New Year’s Eve. And, it rallied another 10% in the first week of 2018.

Last year, the “traditional” natural gas rally started in late September. And it peaked around Halloween. The price of natural gas jumped more than 60% in just one month. But, if you held onto the trade, looking for bigger gains going into the winter months, then you gave up almost everything from the start of 2019.

My point is… no matter how “logical” it seems that natural gas prices should rally heading into winter, profiting off of that logic is really hard to do.

Sometimes though, it makes sense to try anyway. This is one of those times.

Take a look at this chart of natural gas… 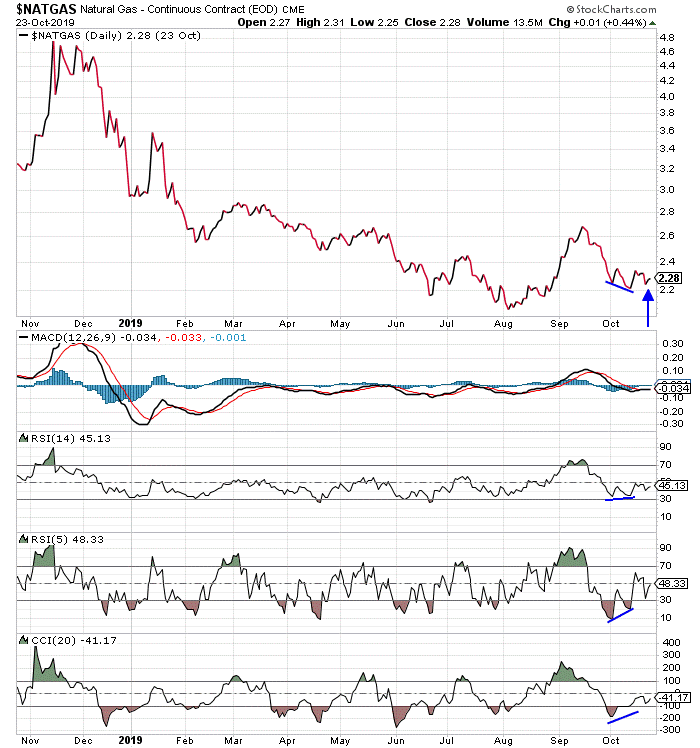 Natural gas made a recent bottom around $2.20 a couple of weeks ago. As the price dipped to a lower low, though, several of the technical indicators (like the MACD, RSI, and CCI ) at the bottom of the chart made higher lows. This sort of “positive divergence” often marks the end of a decline phase and the beginning of a rally phase.

The price of natural gas then bounced up towards its early October high. It pulled back from that resistance level. And, so far at least, the price is holding above the $2.20 low. So, we just might have a “higher low” in place.

This action, along with the positive divergence on the technical indicators, is a bullish sign. As long as the price of natural gas doesn’t close below the mid-October low of $2.20 then the path of least resistance is higher.

Natural gas could be sharply higher by the end of the year than where it is today. And, natural gas stocks should be higher as well.

In fact, this is probably my favorite sector heading into the end of the year.

I just recommended a natural gas stock to readers of my new service, The Breakout Alert. It’s a dirt-cheap stock that trades for just two times earnings… And, I expect it could be 100% higher within the next three months.