Casual investors might not pay much attention to the Federal Reserve.

Earnings reports and trade negotiations are more exciting to keep up with. But believe me, the Fed matters. And the moves it makes can determine the long-term trend in stocks.

The Fed makes most of its major moves by controlling interest rates. And while you might expect higher interest rates from here, the data says otherwise.

The more likely scenario is that the Fed will lower rates even further. And that could be a big boon for stocks. If you want to know why lower rates are likely, look no further than inflation.

Domestic inflation remains well below the Fed’s 2% target. That’s according to the most recent Personal Consumption Expenditures (“PCE”) update. The core data rose 1.6%, in line with expectations and the previous reading.

We care about PCE because it’s the primary gauge that the central bank uses to measure inflation. And ever since the Fed established its 2% inflation target in 2012, inflation has remained stubbornly below the mark. Take a look… 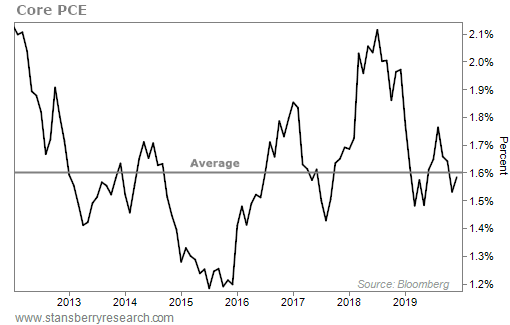 As you can see, we are right at the long-term average today. And inflation has only been above the 2% mark twice in the past eight years.

This matters because interest rates are the Fed’s No. 1 tool for dealing with inflation. When inflation is rising, central banks raise rates to offset it. And when it falls, they can do the opposite and lower rates.

You might wonder how that works in the real world…

So, if the Fed raises interest rates, the U.S. dollar will be more sought after, and therefore more valuable versus other currencies. As rates rise, so do yields on sovereign bonds. So they become more attractive to investors too. All this means the dollar gets stronger, easing inflation.

A reverse scenario plays out when rates are cut. Investors exit the currency because yield is dropping. That drives down the value – or, in other words, a dollar buys you less than it used to.

Understanding this dynamic can help you read the tea leaves of inflation to figure out the Fed’s next move on rates.

Just last week, Fed Chairman Jerome Powell said the rate-setting Federal Open Market Committee (“FOMC”) is worried about persistently low inflation. The committee wants to figure out how to get it moving higher. And it plans to pay close attention to the incoming data and respond accordingly.

Again, the most recent data tells us that inflation isn’t picking up. And that’s why the Fed is more likely to lower interest rates again rather than raise them.

At the end of the day, “easy money” central bank policy isn’t going anywhere soon. Whether that’s good or bad in the long term remains to be seen. But in the short term, low rates mean less competition for stocks – folks will keep putting money in the stock market for a chance at a higher yield.

That’s a big positive for investors. And it’s another reason I expect good times ahead for U.S. stocks. 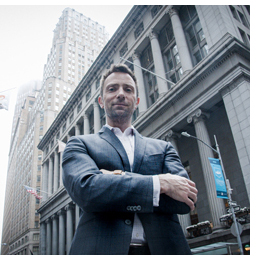 Editor’s note: On February 12, Steve is hosting a free online event to reveal a huge shift in his Melt Up thesis that could send the market skyrocketing. He’ll also explain the three clues to finding stocks with the biggest upside… Plus, you’ll learn which single investment he believes could soar as much as 500% in the months ahead.

Steve’s No. 1 stock won’t appear in any replay… So make sure you tune in on the night of the big event. Learn more about it here.