On Tuesday, July 27, at 7 p.m. ET, Eric Fry and Louis Navellier are going to reveal a small group of stocks that could make you at least $100K over the next 12 months. They’ll even give you the name of one of the stocks during the event.

The Technochasm Reaches the Edge of Space

On Tuesday, Jeff Bezos caught a ride on Blue Origin’s automated New Shepard rocket capsule to the edge of space, 66 miles above Earth.

Bezos is the second billionaire to reach suborbital heights in his own spacecraft in just over a week.

While Bezos and Branson made splashy headlines and brought attention to the possibilities of space tourism, their space flights also drew a lot of criticism.

And they relaunched gripes about the wealth gap… or, as we call it around here, the “Technochasm.”

Bezos really stuck his foot in his mouth when he said, during his post-flight press conference,  “I want to thank every Amazon employee, and every Amazon customer because you guys paid for all this.”

The 57-year-old Amazon.com Inc. (AMZN) founder was likely just trying to make a joke, but his quip called attention to several things:

As the former newsman Dan Rather quipped on Twitter, “The space race of the 1960s was fueled by American taxpayers. This space race is fueled by non-taxpayers.”

The spectacle of the new space race also illuminates the gap between these billionaire “astronauts” (and their potential millionaire space tourism customers) and, well, the rest of us.

That gap right there is the Technochasm.

And that gap is the key to understanding what I’m going to discuss in my next big free event – scheduled for next Tuesday, July 27, at 7 p.m. Eastern (you can reserve your spot here).

Let me show you what I mean…

A $56 Trillion Tech Supercycle Is About to Smash the Markets

There’s a new development accelerating across America, and it’s set to unleash a $56 trillion tsunami in new wealth. On Tuesday, July 27, at 7 p.m. ET, Eric Fry and Louis Navellier will reveal how you can leverage this phenomenon to potentially make $100,000 over the next 12 months. Click here for free signup.

When you compare the average net worth of America’s lower class, working class, and middle class to the net worth of the top 10%, it’s like comparing a tiny office building to the Empire State Building. 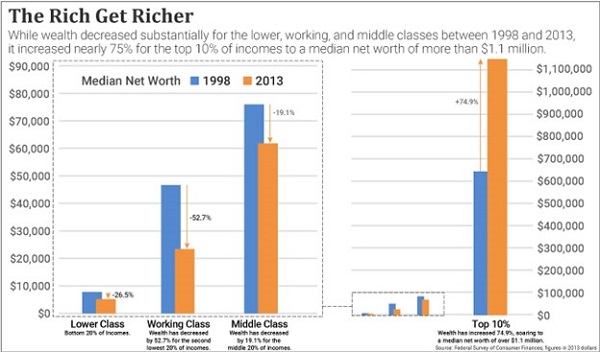 But the most surprising indicator of how badly out of whack things are in America may be the wealth of just three men. 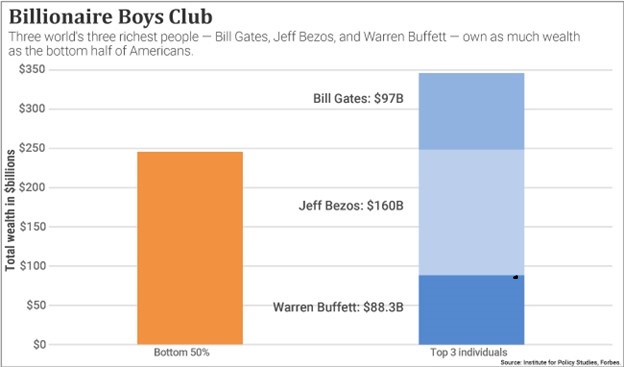 Thanks in large part to the Big 5 and other tech companies, the economy is humming, we’ve got nearly full employment, and the stock market keeps rising.

Yet… the net worth of America’s lower and middle classes keeps plummeting.

But here’s the thing: There is no “solution” to the widening wealth gap.

No one can stop it. Not the brightest minds in Silicon Valley… nor the politicians we send to Washington.

That’s because the catalyst behind this gap is unstoppable exponential progress in computing power, data storage, telecommunications gear, and other technologies that are driving the success of tech firms throughout the world.

The destruction of seemingly strong and dominant businesses by innovative upstarts is a story we see over and over and over in America… and it’s led to the Technochasm.

For example, during the 10-year period from mid-2009 to mid-2019, shares of tech-focused Amazonsoared more than 2,000%, making Bezos the world’s richest man. Meanwhile, dozens of old-school brick-and-mortar retailers were driven into bankruptcy.

Year after year, we watch established businesses that appear sturdy and in control of their markets get utterly destroyed by upstarts.

In many cases, these businesses employ tens of thousands of workers… and are cornerstones of retirement accounts. But the seeming strength of these businesses often hides their underlying weakness. Companies that fail to adapt die a slow but certain death.

That’s why we call this wealth gap the “Technochasm.”

You want to make sure you’re on the right side.

And Louis and I will be talking about one slice of the space sector during our big free event next Tuesday (reserve your spot by clicking here)… and will show you one way to get in on it.

On Tuesday, July 27, at 7 p.m. ET, Eric Fry and Louis Navellier are going to reveal a small group of stocks that could make you at least $100K over the next 12 months. They’ll even give you the name of one of the stocks during the event. Click here for free signup.

The Key to a $56 Trillion Capital Wave

The escapades of Bezos and Branson are fun to watch, but manned spaceflight is just a small chunk of the space industry.

Currently, around 100 satellites are launched every year.

But by the end of the decade, Euroconsult estimates, we’ll be launching nearly 1,000 satellites every year.

Those satellites will be a key part of the one specific advancement that is going to be the most important thing will drive the Technochasm to grow even faster over the next few years.

It’s what happens when you combine a robust tech industry with both a multitrillion-dollar investment boom and a strong political tailwind.

It’s about to unleash a wave of capital worth at least $56 trillion… and that makes it one of the best investment opportunities of the last 30 years.

This technological phenomenon isn’t simply the latest buzzword investment opportunity. It is a uniquely powerful development that could deliver outsized gains for many years to come.

For starters, this “one specific advancement” is a revolutionary advancement that occupies the nexus of several cutting-edge technologies, like artificial intelligence (AI), autonomous driving, and the internet of things (IoT).

Louis and I have identified several small but promising stocks to help investors get on the right side of the Technochasm… and behind the tailwind of that $56 trillion capital wave.

That includes a satellite company that is compiling a long-term track record of success… and, I believe, will reap sizable earnings growth as a result.

If you want to learn more about these opportunities and the strategies that can get you ready to take on this one specific advancement, join me for the Tech Supercycle Summit, my next big FREE event, with legendary investor Louis Navellier.

That event is scheduled for Tuesday, July 27, at 7 p.m. Eastern.

The summit is free, but there’s limited space, so we ask that you RSVP in order to attend. You can do that right here.