Antonio Raimondi has long been honored by Peruvians. The Italian-born geographer and scientist spent most of his adult life in Peru.

He’s known for being one of the founding professors of the medical school at the National University of San Marcos.

And he’s also known for loving all things Peruvian… and his numerous expeditions to all regions of the country.

A century after his passing in 1890, he became the face of the Peruvian inti bank note:

Do you notice anything interesting about this note? The figure of 5,000,000 isn’t a typo. (The largest Peruvian sol bank note today is 200.)

In 1985, Peru was the prototypical case of government mismanagement.

It spent too much in an effort to boost the economy. And the central bank printed money to cover its growing debts.

This led to runaway inflation of over 1,000%. In fact, prices increased so much, the central bank had to create the 5 million inti note above.

NOTE: This exclusive replay link will expire in less than 48 hours.

It was unprecedented in Peru’s history. (Imagine if the U.S. released a $2.5 million bank note tomorrow. That’s essentially what Peru did.)

But despite the note’s high nominal value, inflation-adjusted wages fell 54% in Peru during this period. Historians describe Peruvian living standards at the time as unbearable.

You may think this type of currency devaluation is only happening in the developing world—but you’d be wrong. Western nations are increasingly using the same money-printing tactics to cover their own debt bubbles.

Although you might not see a $5 million U.S. note soon, this money-printing will eat away at your savings just like it did in Peru, Argentina, Venezuela, and Zimbabwe.

But unlike fiat currencies, governments can’t manipulate bitcoin. And today, I’ll share why you should add some to your portfolio as a hedge against rising inflation…

As Daily editor Teeka Tiwari has put it, the world is facing a $69 trillion debt bomb:

Total emerging market debt has tripled since 2007—and now stands at $69 trillion. (Just last year, Argentina took out an emergency $56 billion loan from the International Monetary Fund to cover its short-term debt.)

To make matters worse, many of these loans must be paid back in U.S. dollars. And as the dollar rises, their currencies get weaker. So the loans are more expensive to service.

Now, emerging markets need to pay back (or refinance) $1.5 trillion in debt over the next 18 months. But guess what? They don’t have the money.

Countries are issuing debt they can’t service—and printing too much money to try to cover it. Nothing kills a currency faster than that.

But emerging markets aren’t the only countries firing up the money printers.

On September 12, the European Central Bank (ECB) announced its stimulus plan—including rate cuts and a new round of quantitative easing…

The ECB plans to buy 20 billion euros’ worth of debt per month to boost the eurozone’s sluggish economy. This is just a fancy way of saying it’s printing money out of thin air.

And President Trump wants the Federal Reserve to cut rates, too: 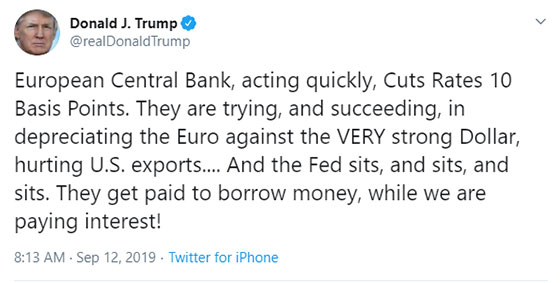 The Fed appears to be listening. It just cut rates by 0.25%. It’s not alone, either…

Japan continues to print record amounts of money. The Bank of Japan’s balance sheet is at all-time highs, nearing $5.5 trillion. It also has negative rates (and is considering lowering them more).

The People’s Bank of China has a balance sheet over $5 trillion as well. And it’s been clear that it’ll provide as much stimulus as it can to keep its economy growing.

The bottom line is, all the major global economies are “stimulating” their currencies and economies in one way or another. And eventually, they’ll end up like Peru in the 1980s.

Gold has been the traditional safe-haven asset. Used for thousands of years, it can hold its value no matter what the economic condition.

And while we still like gold, bitcoin is also a hedge against inflation.

It’s not controlled by any government. And its supply is governed by computer code. Only 21 million bitcoins will ever exist—and 85% is already in circulation.

So unlike fiat currencies, you can’t create bitcoin out of thin air. This makes it a good asset to own in a world being managed like Peru in the 1980s.

For those who have lived through several currency devaluations (like Argentines), bitcoin is a substitute to putting their money in banks. In fact, they’re willing to pay a $1,000 premium or more for bitcoin.

Now, if you’re from a country with an established fiat currency, you probably won’t place your savings into a volatile asset like bitcoin. But consider a small stake; it could turn into life-changing gains as the Great Unwinding unfolds.

When you can’t get any interest on your cash… when governments are printing unlimited amounts of that cash… and when a worldwide Great Unwinding is on the horizon… the risk is not owning bitcoin.

But always remember, bitcoin is volatile. So don’t bet the farm. You just need a tiny grubstake for the potential for life-changing gains.

Again, all you need is a small stake in bitcoin and other cryptos to make life-changing gains. And there’s a phenomenon happening soon that we won’t see again until 2024. It’ll send the market higher.

For the past year, Teeka has been researching several crypto projects set to profit from it. And earlier this week, he revealed the details in his first live crypto training session of 2019.

He even shared his new No. 1 crypto pick during his event. So be sure to find out how to become a crypto millionaire in the exclusive replay right here.